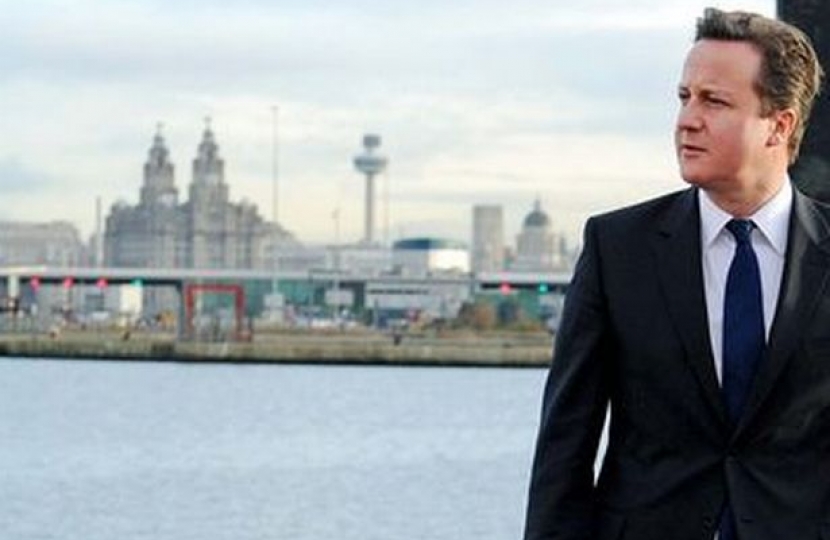 Everyone at the City of Liverpool Conservatives wishes you a Happy New Year and all the best for 2014.

New Year is a time for resolutions. Here’s mine: to make 2014 the year in which Britain begins to rise.

What do I mean by that? This Government has been working to a long-term economic plan. From 2010 to 2012 we focused on rescuing Britain from economic oblivion. Last year we moved to recovery, as the difficult decisions we took began to bear fruit and we bucked international trends.

After three and a half years, it’s time for the next phase of that plan. 2014 is when we start to turn Britain into the flagship post-Great Recession success story. A country that is on the rise.

With record numbers of new businesses, we can be the enterprise capital of Europe. With the school system being fixed, record numbers of students going to university and more than a million young people starting an apprenticeship, we can out-educate the rest of the world.

And this must work for everyone. For me, a Britain on the rise isn’t just a country that punches above its weight in the world; it’s a Britain where everyone who wants to work hard and get on can do so. A country in control of its destiny. A country where every person has the peace of mind to know they can make something of themselves and provide security for their family.

The first thing is we must not resurrect the dangerous thinking that got us into the mess from which we are now recovering. There’s an arrogance and complacency from the Labour critics of my long-term plan. They still advocate the great mistakes that led up to the Great Recession - more borrowing, more spending and more debt.

Last month the Office for National Statistics revealed the recession that began on Labour’s watch was even deeper than we thought. The economy contracted by 7.2 per cent - the biggest fall since the war, costing every household £3,000.

If you doubt how disastrous a return to Labour-style economics would be, just look at countries currently following that approach. They face increasing unemployment, industrial stagnation and enterprise in free-fall. The opposite of what’s happening here.

Our recovery is real, but it’s also fragile, and there are more difficult decisions ahead. A return to that economic madness would devastate this country.

In the coming weeks, I and my ministers will be explaining how the next phase of our long-term plan will help you and this country rise. It includes five simple parts:

One: we’re going to keep reducing the deficit so we deal with our debts, help keep mortgage bills low and don’t place an unsustainable burden on future generations. That’s why in 2014 we’ll be legislating for a Charter for Budget Responsibility, ensuring we fix the roof while the sun is shining.

Two: we’ll continue cutting income taxes. People must keep more of their hard-earned money. We’ll again raise the tax-free personal allowance, which, with our earlier changes, is worth an extra £58 a month to the average worker. What’s more, we’re freezing fuel duty again, saving drivers £11 every time they fill up.

Three: we’ll carry on creating jobs by backing small business. I want 2014 to be a year where more young people are given the opportunities only a job can provide. That’s why we’re going to make it much easier for firms to hire young people by cutting the jobs tax for every business by up to £2,000. Meanwhile, we’ll continue with many infrastructure projects that bring prosperity and economic security to all parts of our country.

Four: we’re going to keep capping welfare and controlling immigration, so our economy delivers for people who play by the rules. This year we plan to cap the country’s overall welfare budget – excluding the State Pension to ensure people get a decent standard of living in retirement.

Five: we’ll carry on fighting to deliver the best schools for every child. A decent education is the best passport to success and 2014 will see a new, rigorous National Curriculum. We’ll also forge ahead with apprenticeships, making vocational education match academic education at every level.

This Government is in it for the long-term, doing what’s right, not what’s easy. We’ve come a long way already. Let’s make 2014 the year when Britain really starts to rise.