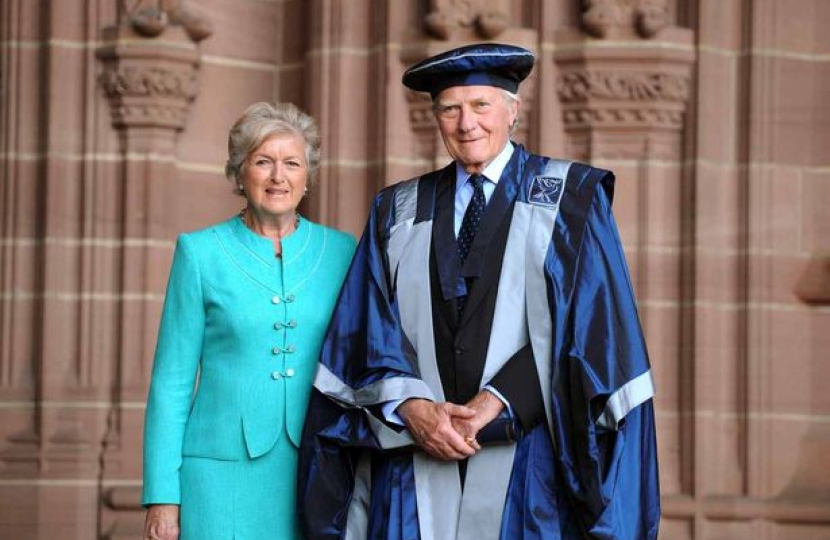 Conservative peer Lord Heseltine was today (10th July) given an honorary fellowship by Liverpool John Moores University in recognition of his instrumental role in the city's regeneration, most notably the transformation of the Albert Dock.

Lord Heseltine said he was "deeply honoured" to get the award in a city which he was "proud to see rise and prosper".

The university's Pro Vice Chancellor Dr Edward Harcourt said that "Few would contest that it was Michael Heseltine who sowed the seeds of this city's remarkable renaissance and transformation over the last 30 years."

"As Environment Secretary, it was his foresight, influence and lobbying in national, political and financial circles that created the partnerships to invest in the regeneration of the Albert Dock, stage the 1984 International Garden Festival and commence a 25-year programme to clean up the River Mersey.

"Today, the dock comprises the UK's largest collection of Grade I-listed buildings and is the most visited multi-use attraction in the UK outside London, and the Mersey is the cleanest it has been since the early 19th Century."

Last year, Lord Heseltine was given the freedom of the City of Liverpool in recognition of his continued active role in the city.

Lord Heseltine commented, "as an adopted son of Liverpool, it has been fantastic to see this transformation which has come about through engaging the community and forming effective partnerships".