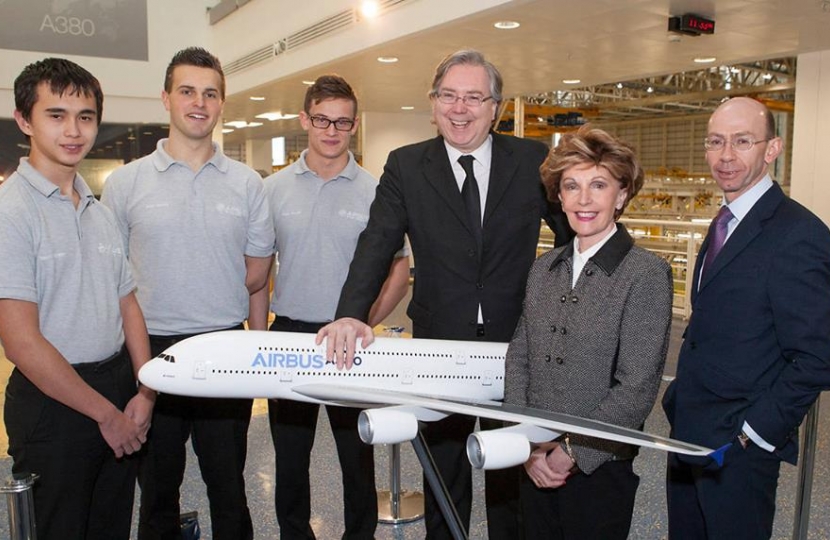 Labour, Liberal Democrat and UKIP MEPs have threatened thousands of British jobs at Airbus and across the North West by voting to continue forcing non-European airlines to pay an 'Emissions Levy' whenever they fly to or from the EU, North West MEP Jacqueline Foster, has warned.

The European Parliament's Environment Committee was voting on plans to continue exempting non-European airlines from its Emissions Trading Scheme (ETS), the so-called 'Stop the Clock' proposal. However, an alliance of Labour and Liberal Democrat MEPs rejected the plan, and voted in favour of charging non-EU airlines a levy for every flight.

The main trading partners, such as those in China, India and the US have all threatened retaliatory measures, with the US Congress already passing a Bill condemning the scheme. However, the Chinese government is likely to respond most harshly to the levy. It had been planning to unfreeze an order of 27 Airbus A330 aircraft that was put on hold due to the prospect of the charges, and it had originally been planning to confirm an order for a further 150 Airbus jets at the end of this month.

This week's vote in the Committee was extremely tight, with 29 MEPs voting in favour of the proposal and 29 against - meaning it was rejected. North West Liberal Democrat MEP Chris Davies defied a call from Nick Clegg and even brought along two other LibDem MEPs not on the Environment committee – Bill Newton Dunn and Andrew Duff – to swing the vote. Labour MEP Linda McAvan also voted to reject the plans and apply the levy to the airlines. North West UKIP MEP on the committee Paul Nuttall did not show up, even though he would have been able to swing the vote in favour of British business.

"100,000 UK jobs depend on the success of Airbus and its supply chain, many of which have now been put at risk by Labour, Lib Dems and UKIP. Liberal Democrat MEPs even turned out in force to defy a call from Nick Clegg to support this proposal.

"Our major trading allies are reacting extremely badly to this vote. We are risking a trade war with China that could cost jobs in the North West, just for the sake of a couple of Euros per flight.

"Labour and Liberal Democrats have behaved extremely irresponsibly with this vote. As ever, UKIP MEPs didn't bother to show up and defend British interests. North West MEP Paul Nuttall often talks about green dogma destroying British jobs and today he had the opportunity to stop this measure, and couldn't be bothered to turn up or find a replacement to vote on his behalf.

Until we can find an international agreement on airline emissions we should not be risking retaliation from major economic partners for the sake of ideology. Labour and the Lib Dems have actively put British jobs at risk and UKIP has not bothered to show up and defend them."