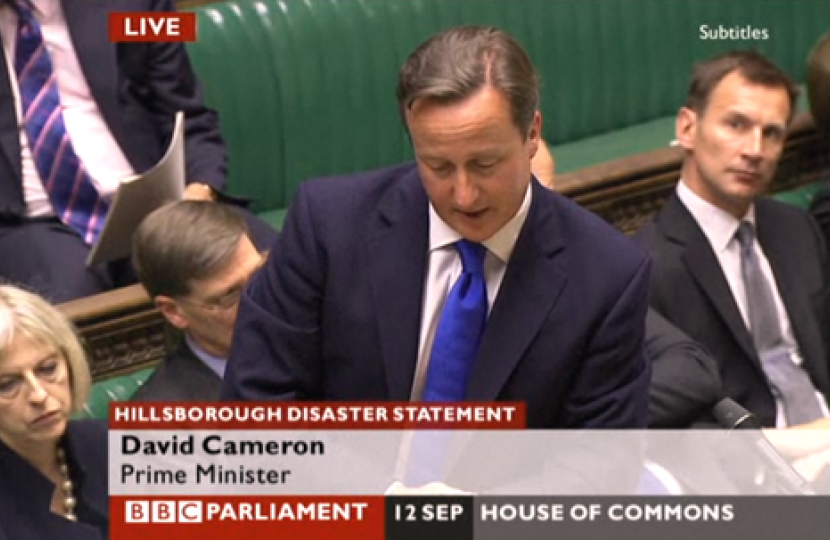 Here is the Prime Minister's statement in full:

"Today the Bishop of Liverpool, the Rt Reverend James Jones, is publishing the report of the Hillsborough Independent Panel.

The disaster at the Hillsborough football stadium on 15 April 1989 was one of the greatest peacetime tragedies of the last century. Ninety-six people died as a result of a crush in the Leppings Lane Terrace at the FA Cup semi-final between Liverpool and Nottingham Forest.

There was a public inquiry at the time by Lord Justice Taylor which found - and I quote - that the main cause of the disaster was 'a failure of police control'. But the inquiry didn't have access to all the documents that have since become available.

It didn't properly examine the response of the emergency services, it was followed by a deeply controversial inquest and by a media version of events that sought to blame the fans.

As a result, the families have not heard the truth and have not found justice.

That is why the previous government - and in particular - the Rt Hon Member for Leigh was right to set up this panel.

And it is why this government insisted that no stone should be left unturned and that all papers should be made available to the Bishop of Liverpool and his team.

Mr Speaker, in total over 450,000 pages of evidence have been reviewed.

It was right that the families should see the report first.

As a result the government has only had a very limited amount of time to study the evidence so far. But it is already very clear that many of the report's findings are deeply distressing.

There are three areas in particular.

The failure of the authorities to help protect people. The attempt to blame the fans. And the doubt cast on the original coroner' s inquest.

Let me take each in turn.

Findings: Failure of the authorities

First, there is new evidence about how the authorities failed.

There is a trail of new documents which show the extent to which the safety of the crowd at Hillsborough was 'compromised at every level'.

The ground failed to meet minimum standards and the 'deficiencies were well known'.

The turnstiles were inadequate.

The ground capacity had been significantly over-calculated.

There had been a crush at exactly the same match the year before.

And today's report shows clearly that lessons had not been learnt.

The report backs up again the key finding of the Taylor Report on police failure.

But it goes further by revealing for the first time the shortcomings of the ambulance and emergency services response.

The major incident plan was not fully implemented.

Rescue attempts were held back by failures of leadership and co-ordination.

And, significantly, new documents today show there was a delay from the emergency services when people were being crushed and killed.

Findings: Attempt to blame the fans

Second, the families have long believed that some of the authorities attempted to create a completely unjust account of events that sought to blame the fans for what happened.

Mr Speaker, the families were right.

The evidence in today's report includes briefings to the media and attempts by the police to change the record of events.

On the media. Several newspapers reported false allegations that fans were drunk and violent and stole from the dead.

The Sun's report sensationalised these allegations under a banner headline "The Truth".

This was clearly wrong and caused huge offence, distress and hurt.

News International has co-operated with the panel and, for the first time, today's report reveals that the source for these despicable untruths was a Sheffield news agency reporting conversations with South Yorkshire Police and Irvine Patnick, the then MP for Sheffield Hallam.

The report finds that this was part of police efforts - and I quote - 'to develop and publicise a version of events that focused on allegations of drunkenness, ticketlessness and violence.'

In terms of changing the record of events, we already know that police reports were significantly altered but the full extent was not drawn to Lord Justice Taylor's attention.

Today's report finds that 164 statements were significantly amended - and 116 explicitly removed negative comments about the policing operation - including its lack of leadership.

The report also makes important findings about particular actions taken by the police and coroner while investigating the deaths.

There is new evidence which shows that police officers carried out police national computer checks on those who had died in an attempt - and I quote from the report - 'to impugn the reputations of the deceased.'

The coroner took blood alcohol levels from all of the deceased including children.

The panel finds no rationale whatsoever for what it regards as an 'exceptional' decision.

The report states clearly that the attempt of the inquest to draw a link between blood alcohol and late arrival was 'fundamentally flawed'.

And that alcohol consumption was 'unremarkable and not exceptional for a social or leisure occasion'.

Mr Speaker, over all these years questions have been raised about the role of the government - including whether it did enough to uncover the truth.

It is certainly true that some of the language in the government papers published today was insensitive.

But having been through every document - and every government document including cabinet minutes will be published - the panel found no evidence of any government trying to conceal the truth.

At the time of the Taylor Report the then prime minister was briefed by her private secretary that the defensive and - I quote - 'close to deceitful' behaviour of senior South Yorkshire officers was 'depressingly familiar'.

And it is clear that the then government thought it right that the chief constable of South Yorkshire should resign.

But as the Rt Hon Member for Leigh has rightly highlighted, governments then and since have simply not done enough to challenge publicly the unjust and untrue narrative that sought to blame the fans.

Third, and perhaps most significantly of all, the Bishop of Liverpool's report presents new evidence which casts significant doubt over the adequacy of the original inquest.

The coroner - on the advice of pathologists - believed that victims suffered traumatic asphyxia leading to unconsciousness within seconds and death within a few minutes.

As a result he asserted that beyond 3.15pm there were no actions that could have changed the fate of the victims and he limited the scope of the inquest accordingly.

But by analysing post mortem reports the panel have found that 28 did not have obstruction of blood circulation and 31 had evidence of heart and lungs continuing to function after the crush.

This means that individuals in those groups could have had potentially reversible asphyxia beyond 3.15pm, in contrast to the findings of the coroner and a subsequent judicial review.

And the panel states clearly that 'it is highly likely that what happened to those individuals after 3.15pm was significant' in determining whether they died.

Mr Speaker, the conclusions of this report will be harrowing for many of the families affected.

Anyone who has lost a child knows the pain never leaves you.

But to read a report years afterwards that says - and I quote - 'a swifter, more appropriate, better focused and properly equipped response had the potential to save more lives' can only add to the pain.

It is for the attorney general to decide whether to apply to the High Court to quash the original inquest and seek a new one.

In this capacity he acts independently of government. And he will need to examine the evidence himself.

But it is clear to me that the new evidence in today's report raises vital questions which must be examined.

And the attorney general has assured me that he will examine this new evidence immediately and reach a decision as fast as possible.

But ultimately it is for the High Court to decide.

It is also right that the House should have an opportunity to debate the issues raised in this report fully.

My Rt Hon Friend the home secretary will be taking forward a debate in government time. And this will happen when the House returns in October.

Mr Speaker, I want to be very clear about the view the government takes about these findings and why after 23 years this matters so much, not just for the families but for Liverpool and for our country as a whole.

Mr Speaker what happened that day - and since - was wrong.

It was wrong that the responsible authorities knew Hillsborough did not meet minimum safety standards and yet still allowed the match to go ahead.

It was wrong that the families have had to wait for so long - and fight so hard - just to get to the truth.

And it was wrong that the police changed the records of what happened and tried to blame the fans.

We ask the police to do difficult and often very dangerous things on our behalf.

And South Yorkshire Police is a very different organisation today from what it was then.

But we do the many, many honourable police men and women a great disservice if we try to defend the indefensible.

It was also wrong that neither Lord Justice Taylor nor the coroner looked properly at the response of the other emergency services.

Again, these are dedicated people who do extraordinary things to serve the public.

But the evidence from today's report makes very difficult reading.

Mr Speaker, with the weight of the new evidence in this report, it is right for me today as prime minister to make a proper apology to the families of the 96 for all they have suffered over the past 23 years.

Indeed, the new evidence that we are presented with today makes clear that these families have suffered a double injustice.

The injustice of the appalling events - the failure of the state to protect their loved ones and the indefensible wait to get to the truth.

And the injustice of the denigration of the deceased - that they were somehow at fault for their own deaths.

On behalf of the government - and indeed our country - I am profoundly sorry for this double injustice that has been left uncorrected for so long.

Why this matters for Merseyside and the country

Mr Speaker, because of what I have described as the second injustice - the false version of events - not enough people in this country understand what the people of Merseyside have been through.

This appalling death toll of so many loved ones lost was compounded by an attempt to blame the victims.

A narrative about hooliganism on that day was created which led many in the country to accept that it was somehow a grey area.

Today's report is black and white.

The Liverpool fans 'were not the cause of the disaster'.

Mr Speaker, I'm sure the whole House will want to thank the Bishop of Liverpool and his panel for all the work they have done.

And I am sure that all sides will join with me in paying tribute to the incredible strength and dignity of the Hillsborough families and the community which has backed them in their long search for justice.

While nothing can ever bring back those who have been lost with all the documents revealed and nothing held back the families, at last, have access to the truth.

And I commend this statement to the House."